What Does an Oil Price Spike Mean for Gold? - Blanchard and Company
My Account

Just days ago, a group attacked the Saudi Arabian Abqaiq oil facility. The location outputs 5 million barrels of crude oil every day. This volume represents 5% of the global oil supply. The attacks disrupted their production sending oil prices north by about 10% marking the largest one-day increase ever seen in the oil industry. Amazingly, the response from gold was muted. 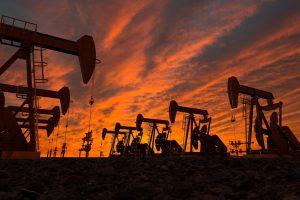 This minimal movement is surprising because history shows that gold reacts violently to oil price changes. For example, the 1973-74 OPEC embargo disrupted 7.5% of the global supply of oil and as a result the price of gold surged 65%.

A few years later the Iranian Revolution from 1978-1979 interrupted global production and oil jumped 119% in price which sent gold surging by 163%.

This quick look back on previous oil price spikes begs the question, why hasn’t gold increased in price?

Amin Nasser, Aramco’s CEO, has made clear that the damaged facility is still able to produce approximately 2 million barrels of oil per day. Moreover, current projections indicate that output will return to their original levels by the end of this month. Perhaps gold is taking its pricing cues from this news. In other words, gold may be consolidating, but what does that mean?

Consolidation, in the context of investing, means that an asset is neither increasing nor decreasing in price. Assets that are consolidating experience a narrow range of price fluctuations and this may be what we’re seeing with gold. That is, the asset is simply holding steady as the global picture comes into focus.

Another possibility for limited gold price movement despite such substantial oil price fluctuations is that investors view oil as less of a concern than before. They may be onto something. Consider that the weight of oil and gas stocks in the S&P 500 is at its lowest point since 1979. This development has been seen by some as a signal of a future in which the world economy is less reliant on oil.

Perhaps the biggest indication of oil’s waning significance is that over the past five years 30% of the returns generated by the S&P 500 came from just five companies, all of which are technology titans (Amazon, Facebook, Netflix, Alphabet, and Apple).

As one utilities analyst at Morningstar remarked, “Renewables were the sideshow as natural gas competed with coal, but we see natural gas and renewables increasingly competing with each other. Increasingly, there are a number of cases where it is more advantageous for customers and utilities to invest in solar and wind versus natural gas.”

The diminishing role of oil in the S&P 500 and the stability of gold is a reminder that conventional wisdom, like everything else, has an expiration date. Oil burns away, but gold endures.