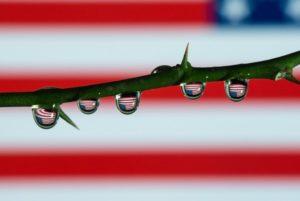 A global pandemic, wrenching unemployment and political polarization have created one of the most uncertain presidential election environments in modern history.

In late October, polls show the presidential race tightening between President Trump and Democratic nominee Biden. The president has been casting doubt over mail-in ballots for weeks and the Republicans have been busily filing hundreds of lawsuits across the country designed to limit how mail-in ballots can be counted.

Issues like postmarks, when the ballot arrives, does the signature match, did the voter fill out the ballot correctly or did the voter move recently are all items being contested in court now – ahead of the election.

In our final election series installment we outline a potential legal battle over the results.

Wednesday morning November 4th, U.S. citizens wake up to the news that neither candidate yet has the required 270 Electoral College votes to determine a winner.

Thousands and thousands of mail-in ballots are still being processed and counted. In several key states across the country, mail-in ballots cannot be processed (verified) and then counted until after the polls close.

Local election systems are overwhelmed with the huge number of mail-in ballots used in 2020 due to the COVID health crisis and are working slowly through the ballots.

Assuming that Amy Coney Barrett will be seated on the Supreme Court before the November 3rd presidential election – she will become the key and deciding vote in a case on mail-in ballots and who, ultimately, will become the United States President for the next four years.

Without a ninth justice on the Supreme Court (which Barret will be) – any 4-4 Supreme Court ties — revert to the decision of the lower court. Let’s unpack what that means.

For example, in mid-October, the Supreme Court already ruled on a case regarding Pennsylvania state mail-in ballots.

A Pennsylvania state court ruled that mail-in ballots could be counted even if they arrive up to 3 days after election day – if they are postmarked by election day. The Supreme Court ruled in a 4-4 tie on the matter.

That means the decision of the lower Pennsylvania court stands – and those mail-in ballots can be counted.

If Amy Coney Barret had been on the court at that time, her judicial philosophy suggests she would have joined with the 4 conservative votes to not allow those votes to be counted. And, the lower court’s ruling would have been struck down.

So, you can see when it comes to election cases – having a fifth reliable conservative vote on the court could make the difference between a Joe Biden presidency and a Donald Trump second term.

It’s no secret why President Trump wanted to advance his judge so quickly.

Amy Coney Barrett has been thrust onto the court amid President Trump’s frank calls for her swift confirmation so that she can be seated in time to decide the election cases.

Yet, in her Congressional testimony, Barrett artfully declined to answer whether or not she would recuse herself if a contested election case comes before her that could determine the outcome of this monumental presidential election.

Indeed, legal scholars point to a case from over a decade ago – Caperton v. A.T. Massey Coal Co., and say it applies directly to Barrett’s recusal decision and would require her to decline to vote on election cases.

The case states: A judge cannot hear a case that centers on the financial interests of someone who supported him substantially in his campaign for election.

Here’s the rationale: “Under the Due Process Clause and Tumey v. Ohio (1927), a judge must recuse himself if he has a direct, personal, substantial, pecuniary interest in the outcome of a case.”

Even more, Justice Antonin Scalia, while he did dissent in the case he wrote in that case:  “In the best of all possible worlds, [judges should] sometimes recuse [themselves] even where the clear commands” of the Constitution don’t require it.

Yes, there is a strong case for Amy Coney Barrett to recuse herself from 2020 election cases.

Will she recuse herself?

The nation has been primed for and is hurtling toward a reply of 2020’s Bush v. Gore, in which the Supreme Court decided the fate of the election and the country for the next four years.

President Trump stated shortly after the death of Supreme Court Justice Ruth Bader Ginsberg: “I think this [election decision] will end up in the Supreme Court,”  “And I think it’s very important that we have nine justices,” instead of the eight seats currently filled.

President Trump publicly stated several times that he wants Barrett to be appointed swiftly so she will be on the court in time to “decide” the presidential election results.

How Will Financial Markets Respond?

In the event that our country moves through November and December with no presidential outcome – as court cases work their way toward the Supreme Court – the stock market will sink.

In 2000, the last time we saw a contested presidential election, the S&P 500 and technology stocks sank. Expect that to happen again – extended stock market weakness and volatility. In this scenario, investors will rush to safe haven assets like gold and silver and the U.S. dollar will tumble by 15-20%. Gold climb moderately amid the uncertainty hitting a new all-time high at $2,100 an ounce.

If the 2020 Presidential election battle is turned over to the courts as it was in 2000 – having Amy Coney Barrett seated on the court all but ensures a victory for incumbent President Trump.

Worth noting – power to pick presidents and strike down laws

No matter your political party affiliation, it is worth noting the extreme power the Supreme Court now has on our society.

In an increasingly polarized environment where Congress has become ineffectual due to gridlock, the Supreme Court has moved to the forefront to be the most important governing body in our land.

Of course, our founding fathers intended for all three branches of government (Executive, Judicial and Congress) to be equal with checks and balances on each other.

The Supreme Court has shown its ability to decide presidential elections (Bush in 2000) and can strike down any law that Congress passes that it sees unconstitutional.

With a strong conservative majority on the Supreme Court with Amy Coney Barrett – and their   lifetime appointments – the Supreme Court has become the most powerful influence and governing body for America for the next 30 years.

In this scenario, once the Supreme Court decides the election – and hands the White House back to President Trump for a second term, U.S. dollar devaluation will continue as the Administration brow beats the Federal Reserve into printing ever more money to attempt to prop up the economy.

The stock market will rally briefly on expectations for another tax cut – but as the second term continues the economic realities of isolationist and combative trade policies tank the U.S. equity market.

Investors will turn to hard assets like gold and silver as the dollar continues to weaken and as capital begins to leave the United States.

Wealthy investors will begin to move their money offshore as it becomes clear the decline of the United States of America is on a track that can’t be turned around. Gold will easily eclipse the $3,000 an ounce mark. For precious metals investors, there is small comfort in their gold and silver holdings, as inflation is becoming rampant and the country’s economic future becomes grimmer.

This concludes our “What Happens If…” election series. With less than one week until election day, we hope that we’ve provided you with valuable information to help you prepare your portfolio for most any eventuality.

Regardless of the election outcome, the economy is still reeling from the pandemic and a quick recovery is unlikely. Inflation is coming. Call us today at 866-629-2281 for a personalized review of your long-term financial goals. We want to help you protect what you’ve worked hard to build.

If you’d like to read the entire six-week series, please follow the links below and let us know your thoughts.

Read Part 5 here: What Happens If…” States Aren’t Ready to Declare a Winner