Though no one is certain, experts agree that humans have mined approximately 190,000 tons of gold from the Earth. Nearly half (48%) of this has been manufactured into jewelry. Nearly a quarter (21%) has been funneled into private investments. This leaves 17% in the private sector and the remaining 14% allocated towards “other” sectors like technology. These numbers leave one question unanswered, how much gold is left under our feet? 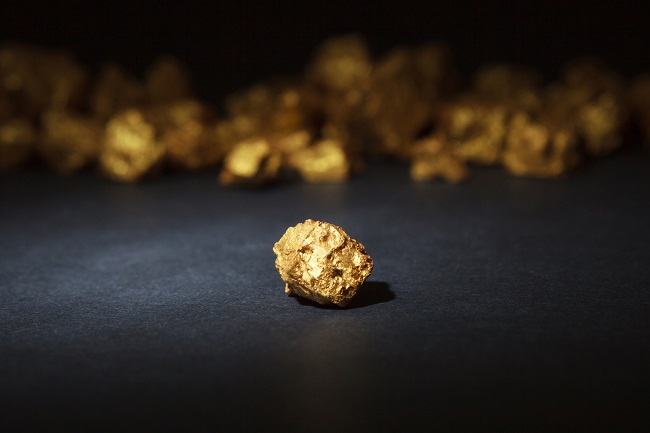 Amazingly, two-thirds of our above ground gold was mined after 1950. In the great span of time, theses last 68 years are just a blink. This short period might lead one to think that over the next 100, or even 200 years we can look forward to hundreds of thousands of tons. The truth, however, is much different.

Experts believe current, below-ground reserves total just 50,000 tons. This relatively modest figure is in contrast to rising gold production in recent years. In fact, gold extraction has a history of successive peaks. In 1912, 1940, 1971, and 2001 gold production peaked with each year outpacing the previous one. This pattern resumed in 2011 and production reached new highs for every one of the following years through 2015 when production hit 3,100 tons. In recent years production has flattened out at about this level.

These figures have led to differing estimates regarding “peak production,” the period during which global gold extraction maximizes and is followed by a period of decline until there is no more extractible gold. This terminal decline underpins what is called the “Hubbert peak” theory.

The theory comes from American geophysicist M. King Hubbert. In 1956 he presented the American Petroleum Institute a paper outlining his theory. In the case of Hubbert, the idea of peak production was applied to petroleum. He predicted that global extraction would reach its peak between 1965 and 1970. He was right, but he was also wrong.

Oil production did, in fact peak in 1970. However, this pinnacle has not been followed by a sustained, decline wherein each year yields less than the previous one. The reason: new technology has equipped us with the tools to pull oil from unconventional resources. Will gold mining follow this story?

The answer is complex; gold extraction is connected to more than technology. Mining operations are inextricably linked to gold prices; if gold becomes too cheap they turn off the machines. They may be able to pull more gold from the Earth, but if those finds cannot be sold at a price that exceeds the operational costs, then it’s not worth the effort. In fact, when miners consider new deposits they segment them into “reserves” and “resources.”

A reserve represents gold that’s economic to mine at current gold prices. Resources, however, are finds that offer the potential to be profitable in the event that gold prices rise. Moreover, while technology may be increasing our capabilities, researchers are discovering that deposits are becoming increasingly difficult to access than in previous decades. Consider that “The likelihood of a discovery leading to a mine being developed is very low – less than 0.1% of prospected sites will lead to a productive mine,” according to research from The World Gold Council. Meanwhile, “10% of global gold deposits contain sufficient gold to justify further development,” they continue. Exploration alone can take up to 10 years and involve heavy costs like geological surveys and chemistry analysis.

The time to get your gold is now.