Don’t look now, but the trade war is turning into a currency war.

This month, the United States labeled China a “Currency Manipulator,” turning the tensions between the world’s two largest economies to a boil. 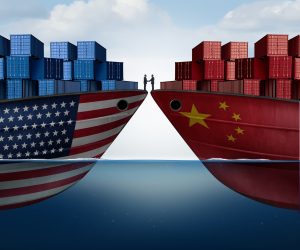 Earlier this month, the Chinese currency – the yuan – tumbled below 7 per U.S. dollars, marking an 11-year low.

“The drop suggests that the central bank of China is willing to weaponize the currency in light of the trade war,” Andrew Collier, managing director of Orient Capital Research in Hong Kong said in news reports.

Countries benefit from weaker currencies as it makes the cost of their exports cheaper to foreign buyers, and thus stimulates demand for their goods and economic growth.

It’s not just China that wants a weaker currency.

President Trump has tweeted his demands for a weaker U.S. dollar and has publicly called for lower interest rates from the Fed, which does push the dollar lower.

While the value of a nation’s currency may seem a bit esoteric, this is a significant development.

Students of history may remember the last time we had a global competitive devaluation was in the 1930’s. Yep, the Great Depression.

As the global economy began slowing in 1930, countries began slapping tariffs on imports to protect their own country’s interests. The most famous, or infamous, is the Smoot-Hawley Tariff passed by the U.S. Congress which imposed tariffs on many imported goods.

“But each move – devaluations, tariffs, and other attempts to level the playing field – led to more retaliation. In the single year that elapsed between the third quarter of 1931 and 1932, world trade declined 16 percent. One historian described the series of events as an “uncoordinated break-up” of the global currency regime,” according to Bloomberg.

You remember what happened next. The Great Depression.

Britain is on the brink of moving out of the European Union, which will trigger a massive devaluation of the pound versus the euro.

The United States and China are already lobbing currency strikes, each government attempting to push its currency lower.

As all these major global currencies like the dollar, the yuan and the pound weaken, it will force other countries around the globe to join in the devaluation to avoid turning their exports into a standstill.

The United States and China trade war lit a match. That fire is getting bigger and harder to control.

As countries race to lower their currencies, the only winner is gold and investors who own gold.

Gold remains the world’s premier safe-haven asset. Gold is a global currency without any of the obligations, debts or deficits that come along with the U.S. dollar or any other currency.

While countries debase and manipulate their fiat currencies, gold is climbing – up nearly 20% this year. Goldman has a six-month forecast of gold at $1,600. Citi sees the same rise to $1,600 in six months to a year, and Bank of America Merrill Lynch sees prices climbing toward $2,000 within two years, topping the record of $1,921.17 reached in 2011.

The trade war and the developing currency war will get worse before they get better. While the U.S. Administration is beholden to two four-year limits on presidential power, the Chinese government has no constraints. They are in for the long game.

Consider increasing your allocation to gold, a hard asset that is climbing in value, not falling, and is safe from government or central bank manipulation.

The only winners in a currency war are those who own gold.

Call Blanchard today at 1-800-880-4653 to learn the optimal amount of gold you should hold in your portfolio.