Will the US Ever Be Able To Pay Its Debt? - Blanchard and Company
My Account 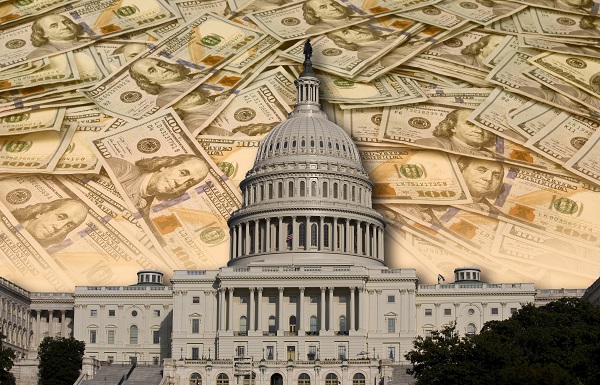 When an individual can’t pay the mortgage on their house, the bank takes possession of the home.

When a person can’t pay their car loan, the finance company repossesses the car.

The U.S. government is racking up more and more debt every month, with a total of $22 trillion of debt owed today.

Just like a person who doesn’t pay off their credit card bill in full at the end of the month has to pay interest on that balance, so does the government.

No doubt interest rates are extremely low right now for the U.S. government – around 1.49% for a US 10-year Treasury note.

But, the interest on $22 trillion still adds up, to the tune of about $1 billion dollars a day in interest, according to Michael Peterson is CEO of the Peter G. Peterson Foundation, a nonpartisan fiscal watchdog group.

That’s a billion dollars a day that the US government needs to collect from its taxpayers – yes you – in order to pay interest on debt.

That’s a billion dollars that isn’t going into the Social Security fund, or isn’t going to fund schools, or to build new roads, highways or improve our aging infrastructure system.

The debt and deficit have climbed in recent years. That’s unusual because the economy has been growing. Historically, the debt only rises when we are in a recession and the government needs to spend a lot of money in fiscal stimulus to help boost economic growth. Not now. The government has been on a borrowing binge during good economic times. The recent tax cut, while it may have benefited you personally, has decreased government inlays and contributed to rising debt levels.

The piper must always get paid. The bank wants your monthly mortgage payment and the auto finance company wants your monthly car payment. The US government will continue to pay interest on the $22 trillion and rising debt levels.

Once interest rates rise, (they always have in past generations), the interest payments on government debt will also go up.

Rising debt levels will make it more difficult for the government to meet its obligations to future Social Security recipients, fund schools and repair highways in the future.

Don’t expect that debt to get paid off anytime soon.

While government may not have its fiscal house in order, you can take control of your financial future with investments in tangible assets like gold bullion.

The rising debt levels are just another way the government degrades the value of its fiat currency. The risk remains that future Administrations could choose to inflate their way out of the debt crisis, by devaluing the US dollar and printing more paper dollars.

The case for gold ownership grows stronger every day. If you haven’t fully diversified your portfolio with tangible assets, take action today to protect your wealth.

If you’d like to learn more, sign up for our newsletter. Get our tales from the vault, our favorite stories from around the world and the latest tangible assets news delivered to your inbox weekly.