The government doesn’t need to tell you that prices are rising on just about everything. Anyone who pays rent, buys health insurance or has a kid in college knows that prices have been rising in recent years. 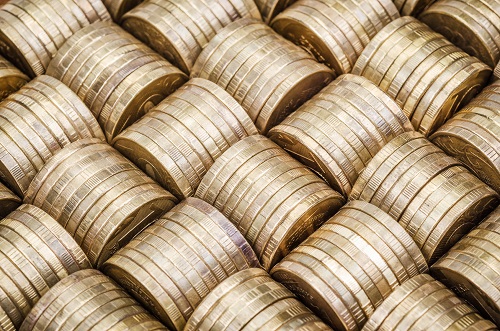 Government inflation figures have been low in recent years, but finally, the official numbers are catching up to the reality consumers face each day.

The Federal Reserve’s “preferred” inflation gauge – the personal consumption expenditures index hit a 2.1% annualized reading in February, the Commerce Department reported Friday. That is the highest level since March 2012 for that price measure and now exceeds the Fed’s stated 2% inflation target.

Gold prices climbed on Friday gaining strength after a Federal Reserve official reiterated that it made sense to raise interest rates at a gradual pace in 2017. Spot gold traded up to $1,248.20 an ounce on Friday, up from $1,150 per ounce at the start of the year. Gold traditionally outperforms during inflationary periods and will continue to gain support as rising price pressures continue to spread throughout the economy.

Fed Officials Not In a Rush

That follows a speech on Thursday where Dallas Fed President Rob Kaplan also reiterated a patient approach to raising rates in an interview with MarketWatch. The federal funds rate stands a historically ultra-low rate of 0.75-1.00% right now, which remain an extremely accommodative stance.

In related market action, the price of crude oil, another closely watched inflation gauge, surged last week, as June Comex crude oil futures climbed from $47.63 a barrel to $50.92. The price of oil gained amid renewed fighting in Libya, which disrupted oil production there and amid speculation that OPEC members will extend their output cuts beyond the current June deadline. Rising oil prices tend to feed inflationary pressures throughout the entire economy, and are considered to be gold-bullish.

The gold market raked in gains of roughly 8% in the first quarter 2017, boosted by the weaker dollar and concerns surrounding President Trump’s proposals for new tax cuts and infrastructure spending.

Looking Ahead: Challenges In D.C.

Market watchers are keeping a close eye on developments on Capitol Hill. Optimism that President Trump can push through his legislative agenda is waning following the recent failed attempt to “repeal and replace” the Affordable Care Act, or Obamacare. This calls into question the extent and success the Republicans may have on key tax cut and infrastructure spending bills.

“President Donald Trump has already run into difficulty in implementing his initiatives, most notably the judicial blocking of two executive orders on immigration and the failure of House Republicans’ plan to repeal and replace the Affordable Care Act (ACA). It’s not hard to imagine that he may find it hard to push through the sweeping tax reforms he has promised,” says Beth Ann Bovino, U.S. chief economist at S&P Global Ratings.

“The Trump presidency is off to a slow start and is inexperienced in getting legislation passed. The administration has been slow to put critical staff in place and has largely left legislative strategy to the Republican leadership in Congress. Looking ahead, it now seems much less likely that the President and the Republican-led Congress will be able to fully implement their ambitious agenda,” adds Mark Doms, senior economist at Nomura.

Market watchers are rolling back the size and scope of their expectations for new policy initiatives. “In our baseline forecast, a tough legislative environment reduces chances of seeing a comprehensive tax reform pass Congress. The White House and Congress will likely cut their losses and instead push through a simple across-the-board reduction in personal income and corporate tax rates – worth $500 billion, with just about equal shares of cuts to households and corporations – by the end of 2017 while letting the deficit rise somewhat on the insistence that faster growth will pay for the tax cuts in the 10-year budget horizon,” Bovino says.

What It Means For Markets

The stock market has rallied significantly in recent months boosted by expectations of a number of these key policy proposals becoming reality. If scaled back legislation is passed, the stock market will be vulnerable to an adjustment lower.

The stock market is ripe for a so-called “Second Half Fade.” Typically gold rallies strongly when equities fall in a corrective phase or bear market. Gold prices are a relative bargain now compared to the highs seen in 2016. If stocks begin to reverse lower, gold prices could shoot higher.

Is your portfolio properly diversified? Protection – in the form of gold diversification – is relatively cheap now, but could quickly become more expensive once the stock market turns.