Welcome coin investors! The history of coins and money is fascinating. Test your coin IQ with the questions here. Let us know how you did in the comment section below! 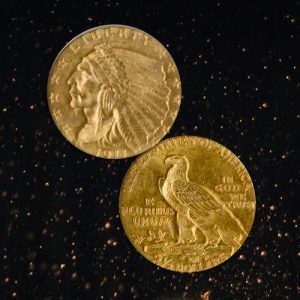 Answer: The 1892 Columbian Exposition half dollar was minted to commemorate the World’s Columbian Exposition, also known as Chicago’s World Fair. These half dollars with a face value of 50 cents were sold for $1 to help cover the spiraling costs of the World Fair. With a fairly high mintage, only a few coins of high grade quality show outsized value. The average auction price for all years of the coin is around $613, according to the NGC.

Earn extra credit if you know the translation.

Answer: The Italian phrase translates to “Deeds are manly, words womanly” and is the Maryland state motto. That phrase appeared on the 1934 Maryland Silver Commemorative coin.

This coin is an example of a classic U.S. commemorative coin. The 1934 Maryland half dollar was issued to celebrate the 300th anniversary of English colonist’s arrival in the state Maryland. About 300 English colonists arrived aboard two ships (the Ark and Dove) in 1634 to settle in the area that is now Maryland. Lord Baltimore George Calvert held the Royal Charter for that land. Notably, this coin is one of the first commemoratives struck after the start of the Great Depression in 1929. Struck at the U.S. Mint in Philadelphia, the mintage totaled 25,000.

Hint: The obverse features a male Indian chief with a large ceremonial headdress.

Answer: The Indian Head Quarter Eagle with a face value of $2.50 was introduced in 1908 and minted through 1929. It is noteworthy for its incused design: the lettering is sunk into the flat plane of the coin. This revolutionary sunken design concept is credited to a Boston physician: William Sturgis Bigelow, a friend of President Teddy Roosevelt. Grading of these coins is considered difficult as the incused design does not show much wear.

The coins were popular Christmas gifts in the late 1920’s and remain extremely coveted by collectors today.

Take a look at a few examples here.

Coin details: Bella Lyon Pratt crated the design which features a Native American Indian Chief on the obverse and an eagle facing left on the reverse. The 1911–D mintage totaled 55,680 and is considered the “key date” of this series. The survival rates are low, which increased the rarity value of these stunning 1911 coins.

Trivia Questions For Coin Collectors: Do You Know The Answer?

Beyond Bullion: The Beauty and Allure of Pre-1933 Gold Coins

Gold Bullion or Rare Coins: Which Is Right For You?