Test your coin IQ with July’s installment of this popular column. 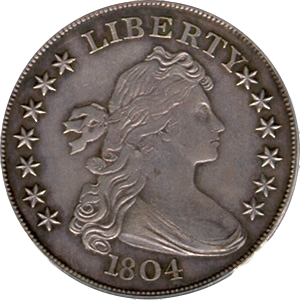 Extra credit: What is the date range of the coins minted there?

Answer: The Dahlonega Mint in Georgia. Coins minted at the Dahlonega Mint are highly sought after by collectors due to the historical significance of the mint, low survival rates and low mintage of the coins produced there.

The outbreak of the Civil War changed it all. The mint was closed and never reopened. In 1878, the building was destroyed by fire but the massive foundation remained intact. Visitors today can see North Georgia College’s Price Memorial Hall which was built on the original foundation. The building’s spire features an incredible 23 ounces of Dahlonega gold. At the Georgia State Capitol, visitors can admire 60 ounces of Dahlonega gold on its dome.

Extra credit: How much was the gold worth?

Answer: The authorities arrested Julio Nivelo in Ecuador by local police and members of U.S. Immigration and Customs Enforcement.

The precious metal had been sitting unattended in a bucket in the back of an armored truck with its rear doors open wide. The thief saw opportunity as the two guards were distracted and talking by the front of the truck. Nivelo grabbed a five-gallon metal bucket out of the back and took off down the sidewalk as fast as he could go.

Extra credit: What year was the 1804 dollar actually minted?

An 1804 U.S. Silver Dollar sold for $3.29 million dollars in March 2017 at a public auction. The coin was graded by PCGS. Considered by many collectors to be the ultimate trophy coin it features a bust of a woman with flowing hair who represents liberty. The 1804 silver dollar is not only rare – only 15 are known to exist – but it boasts one of the most fascinating historical stories of any U.S. coin.

Back in 1804, the Philadelphia Mint did strike a total of 19,570 silver dollars, according to the official U.S. Mint report for that year. However, as Mint officials were more concerned about frugality as opposed to accuracy of the year on the coin. They used dies leftover from 1803 and possibly it is believed 1802 as well!

Then, silver dollar production was halted in 1804 to prevent arbitrage from savvy traders who were shipping them to the West Indies to exchange for heavier Spanish milled dollars, which contained slightly more silver. The traders then melted down the Spanish dollars back in the U.S. for a nice profit!

Fast forward a few decades to 1834. An important diplomatic mission was underway, ordered by President Andrew Jackson, to develop relations with several key Far and Middle East countries. The special agent, Edmund Roberts, was to deliver a set of U.S. coins as a gift to these foreign leaders. The State Department issued a special request to the U.S. Treasury to deliver sets that included coins of each type in use in both silver and gold. Two of the coins hadn’t been minted since 1804 – the silver dollar and eagle. Mint Director Samuel Moore made an executive decision to include those coins in the set.

Since no dies ever existed for 1804 silver dollars the Mint created new ones in order to strike the coins for the gift set. Numismatics can easily identify the 1804 dollars as those struck in 1834 from the telling feature on the rims. The 1804 silver dollars show 1834 style beads on the rim versus the tall tooth-like rims found on coins 30 years earlier. A rare piece of history indeed.

Trivia Questions For Coin Collectors: Do You Know The Answer?

Beyond Bullion: The Beauty and Allure of Pre-1933 Gold Coins