What Drives The Price Of Gold Coins? - Blanchard and Company
My Account

Have you ever wondered what makes the price of gold coins rise and fall? Check out our top 5 list here. 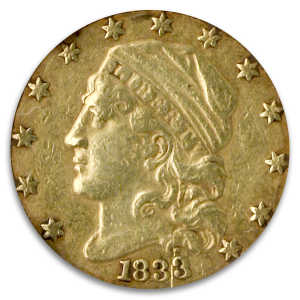 A key factor that drives the price of gold coins higher and lower is the value of spot gold (the open market price for gold bullion that fluctuates every day.) As gold prices climb, gold coins tend to climb – sometimes even more dramatically than spot gold.

There is typically a “spread” or a difference between the price of a gold coin and spot gold. The spread reflects the additional value of a coin, based on its rarity and condition.

Gold is a “safe-haven” asset, and it has been for centuries. Kings, governments, the wealthy and mom and pop investors have turned to gold for hundreds of years as a method to preserve and grow wealth. It is a universally accepted store of wealth.

In 1980 – as gold soared to its then all-time high at above $800.00 an ounce, geopolitical conflicts like the Soviet invasion of Afghanistan and revolution in Iran supported the big price gains. That supports the price of rare coins too.

Today, the world feels even more unstable. The threat of trade wars loom over economic growth. Russia has been accused of meddling in democratic elections. The United States bombed Syria earlier this month. The isolated dictator of nuclear-armed North Korea continues to posture for more control on the world stage.

An escalation of any of these events has the potential to send gold and rare coin prices soaring higher in 2018.

Gold has long-been considered an excellent hedge against inflation, which is of course, rising prices. Inflation typically climbs 3%, on average, every single year. Add that up over a 20-year period, and your hamburger, gallon of gas, trip to the doctor or new car just got a lot more expensive.

A 35-year study by Penn State University researchers found that when inflation turns up, the response of coin prices could well be quicker and larger than the returns on most other assets – even gold bullion. That means the price of rare coins rises faster than even spot gold during periods of rising inflation.

The U.S. dollar and the price of gold (and gold coins) have a negative correlation. That simply means, as the dollar goes down in value, the price of gold goes up. Blanchard CEO David Beahm recently wrote about this in his weekly LinkedIn commentary. Since 2001, the value of the U.S. dollar fell by 27%. That means your same hard-earned dollar is now worth 73 cents.

A key factor that makes rare coins and gold bullion a great investment is its low correlation to the stock market. When stock prices fall in a bear market or a panic, gold prices tend to rise – and history has shown rare coins climb significantly during this time. Portfolios that contain at least some gold or rare coins outperform those that don’t.

This was evident during the 2009 bear market in stocks. The Saint-Gaudens “Double Eagle” climbed significantly more than the price of spot gold.

Gaudens are one of the rare coins that most often mimic the movements of gold bullion. When gold is trading up, Saints trade up, and vice versa. But once gold starts a significant run higher, Saints can significantly outperform gold prices at the same time.

Gold coins often track the price of spot gold. However, there are many instances when rare coins significantly outpace the underlying price gold.