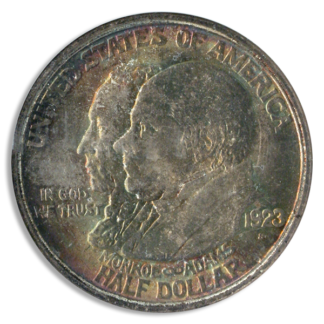 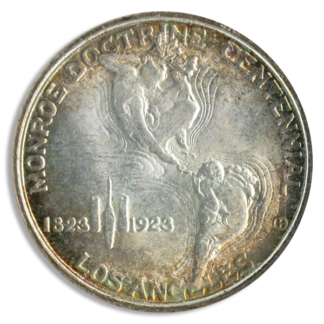 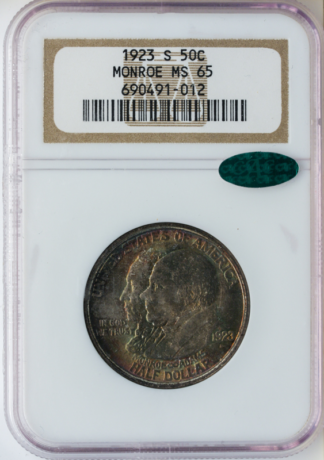 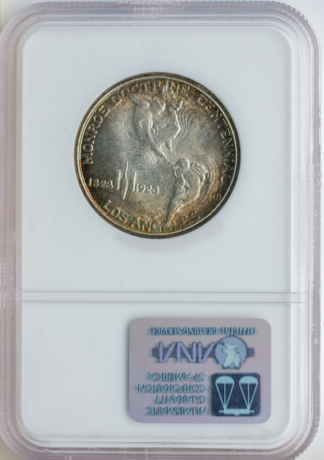 What do Hollywood movie studios and the foreign policy declaration by President James Monroe – known as the Monroe Doctrine – have in common?

No doubt it's an odd pairing.

The answer is – a 1923 commemorative silver half dollar.

In the early 1920s scandals were tarnishing the reputation of the motion picture industry.  Within a span of a few months, actor Wallace Reid died from a drug overdose, director William Desmond Taylor was murdered under mysterious circumstances and "Fatty" Arbuckle was indicted for the killing an actress.

The movie studios desperate to repair their image across America launched a public relations campaign. They founded a committee: the American Historical Revue and Motion Picture Historical Exposition, to tackle the project. Yet, they needed funding.

The Exposition decided that a commemorative coin could serve them well – raising funds and also generating positive PR for the movie industry.

The committee members looked back in history 100 years and decided that the Monroe Doctrine of 1823 could make for a popular coin.

History buffs will remember this important foreign policy statement issued by President Monroe in 1823 which stated to the world in no uncertain terms that the U.S. would not tolerate European interference, control or influence in North and South America.

Thus, the idea for the Monroe Doctrine Centennial Half Dollar was born.

Ultimately, the commemorative coins were put on sale for $1 each. However, demand fell short of the total 274,077 silver coins that were minted.

Many Monroe Doctrine Centennial Half Dollars were released into circulation at face value after sales fell well short of that number – which is why collectors today will find this coin is typically offered in a circulated state.

A sculptor – Chester Beach – designed the elaborate silver coin. The obverse features the busts of Monroe and his Secretary of State in 1823, John Quincy Adams. Circling the coin are the inscriptions UNITED STATES OF AMERICA and HALF DOLLAR. On the left you will see: IN GOD WE TRUST, and on the right the date and mint mark.

Originally, the reverse was intended to be an image representing North and South America. However, instead, Beach created two female figures which were drawn in a rough approximation of the shape of each continent.

The coin also depicts the major ocean currents of the Atlantic and Pacific to signify the unimpeded flow of goods between the two continents thanks to the Monroe Doctrine. The inscriptions MONROE DOCTRINE CENTENNIAL and LOS ANGELES encircle the border of the reverse.

Are you curious? See the artistry of this truly unique coin here.