Americans have accelerated the accumulating of liquid cash more than ever. The M2 money supply, sometimes called the “M2 money stock” is at its highest point in recorded history. Moreover, the figure has risen at a near vertical ascent since the start of 2020. As the Wall Street Journal reports, the M2 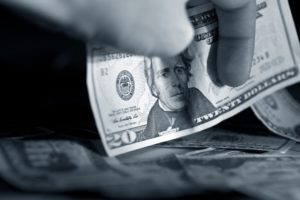 “has increased by an astonishing $4 trillion. That’s a one-year increase of 26%—the largest annual percentage increase since 1943.”

The M2 money supply is a measure of physical currency, demand deposits, negotiable order of withdraw accounts, and travelers’ checks (called the M1 money supply) and “near money” which includes less liquid assets like savings accounts, money market accounts, and certificates of deposit.

The massive growth of the M2 money supply is due to several factors. First, the U.S. has increased their purchasing of Treasuries and mortgage-backed securities. These purchases have added to individual accounts. The second factor is a similar increase in activity from commercial banks. Since the beginning of the COVID pandemic these transactions have added a total of approximately $1 trillion to M2. Third, U.S. companies initiated a dramatic drawdown of $800 billion in credit lines to help weather the pandemic. However, much of this activity occurred between February and April of last year. In recent months corporate bank borrowing has decreased “leaving a net $300 billion increase,” according to reporting from the Wall Street Journal.

The question some gold investors might have is “why does this matter?” One answer can be seen from data published by the World Gold Council which shows that “gold has been more effective in keeping up with global money supply over the past decade.” This relationship is one that we have discussed previously at Blanchard when we explained that “In 2011, gold reached a historic high of $1,900 an ounce just as the M2 money supply surged above 10 percent on a year-over-year basis.” The same Wall Street Journal reporting referenced above concluded that the M2 money supply is expected to increase by another $2.3 trillion in 2021 which will translate into a 12% increase in the total “even without any new lending or further purchases of securities by banks.” Simply, the rise of the M2 money supply likely bodes well for the value of gold.

This dynamic is poised to intensify as more American’s begin receiving their stimulus checks. More money will be in hand among a populace that has already added to their cash holding considerably over the last twelve months. The personal savings rate reached 20.5% in January which is a meaningful increase over the 13.4% seen in December of 2020. In the meantime, more investors are looking for ways to grow their wealth as fixed income assets continue to underwhelm. Additionally, as the Federal Reserve continues to take an aggressive stance towards monetary policy the value of the dollar is coming into question as money floods the system. In this kind of setting more investors seek reliable stores of value for their cash and gold enjoys new life.

2 thoughts on “What “Money-In-Hand” Numbers Mean for Gold”