The Rarest of the Rare

These extremely rare coins have historically outpaced rising gold bullion markets and other rare coin markets, because this is one of the thinnest markets in all of hard assets. At the same time, they offer all of the intrinsic benefits of gold. Not only have these coins preserved wealth in flat gold markets, they have protected investors from inflation during bull markets. 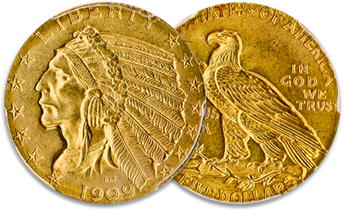 Gold Coin History – Where Did the Coins Go?

U.S. gold coins were issued for circulation from 1795 to 1833 in six denominations: $1, $2.50, $3, $5, $10 and $20. The total mintage of U.S. gold coins exceeded 100 million pieces from eight mints. However, very few of these coins remain today. This is due primarily to two massive gold coin-melting events launched by our government, effectively transforming U.S. gold coinage from common monetary units into excellent long-term holdings for investors and collectors.

The first melting occurred in 1834 when the gold content of U.S. coins was reduced, due to the fact that the coins’ intrinsic value exceeded their face value. The second melting occurred in 1933, when more than 90% of all U.S. gold coins held by individuals, banks and the Treasury were recalled and melted into 100-ounce and 400-ounce gold bars.

Of the surviving U.S. gold coins that remain, not all are actively traded on the market. Many have been hoarded in sets or long-term investment portfolios.

U.S. gold coins are among America’s most popular collector coins, with the rarest key dates among them appreciating the most over time. Since the rarest coins are not easily obtainable, relatively small increases in demand tend to push prices upward.

One of the best-known success stories of rare coin investing is the collection of New York attorney Harold S. Bareford. From 1945 to 1955, Mr. Bareford accumulated one of the most complete collections of U.S. gold coins ever seen, at a total price of $13,832. When his collection was auctioned in 1978, it realized $1,287,215.

Another great example comes from collector Louis Eliasberg, who spent $300,000 on a collection that sold at auction for a staggering $12,400,000.